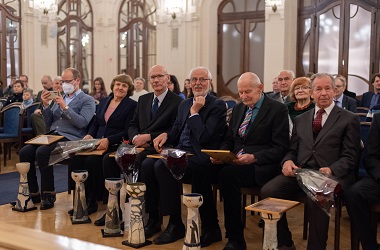 "You are special and you have no limits. You are the carriers of scientific thought in Lithuania," Virgilijus Dirma, Head of EU and International Relations at Infobalt, addressed the scientists of the Faculty of Mathematics and Informatics (MIF) of Vilnius University (VU), who gathered for the Lithuanian Luminaries 2022 award ceremony.

On 8 November, the Lithuanian Academy of Sciences hosted the award ceremony "Lithuanian Luminaries for Mathematics and Informatics 2022" of the project “Lithuanian Luminaries 2022” carried out by M.K. Čiurlionis Foundation, the Lithuanian Academy of Sciences, the Faculty of Mathematics and Informatics of VU and the Infobalt Association. During the event, M. K. Čiurlionis Foundation awarded the REX cups to bright, distinguished personalities who have left a distinct mark in mathematics and computer science in Lithuania.

"I have to admit that this nomination was unexpected but delightful," said Professor Dr. Habil. Vilijandas Bagdonavičius, one of the founders of accelerated testing theory, as he took to the stage to receive the award. He has published over 130 theoretical and applied papers in reliability theory, survival analysis and mathematical statistics.

Professor Dr. Habil. Valentina Dagienė, a computer scientist, Doctor of Physical Sciences, actively works in the field of children's education. She has published more than 150 scientific papers and more than 100 science popularization articles on education, lithuanianisation of computer software, and has prepared many educational books and textbooks on computer science. For her, this award is yet another challenge: "It is one more responsibility for me to say that my aim is to contribute as much as possible to the work of those who educate. I want all my energy to be devoted to the teachers of Lithuania and the world."

Professor Dr. Habil. of Physical Sciences Vygandas Paulauskas, a mathematician and author of textbooks on functional analysis, has published more than 120 scientific papers. His research interests include limit theorems on infinite-dimensional spaces, approximation of operator semigroups.

Professor Dr. Habil. Mifodijus Sapagovas, a mathematician and textbook author, has developed a method for studying the stability of difference schemes for the nonlocal conditions of parabolic equations. He has received numerous awards for his scientific achievements.

Professor Dr. Habil. Šarūnas Raudys, a cybernetician and computer scientist, stressed that science is not a job for him – it is a way of life that he enjoys. He has developed a way to link theoretical knowledge from two fields – multi-annual statistics and neural networks – by creating qualification and prediction rules.

One of the cups was awarded to the late Professor Dr. Habil. Adolfas Laimutis Telksnys. Up until his death, even in his old age, the professor remained committed to science. He was awarded the Commander's Cross for services to Lithuania and for promoting Lithuania's name worldwide. He published 163 scientific papers and made six inventions during his career. He is known as the Godfather of the Lithuanian internet. Linas Aidokas, the last PhD student of Professor Telksnys, who took the award, talked about his work with the scientist, his ambitions, and emphasized the professor's ability not only to enjoy the processes of his work but also to appreciate the results.