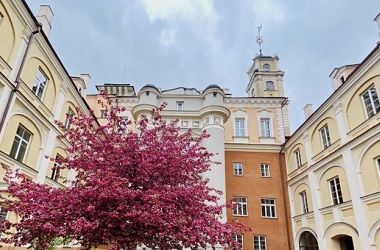 Vilnius University (VU) is the top university in Lithuania, according to the Lithuanian university rating announced for the seventh year in a row. In the ranking of the country’s higher education institutions, compiled by the magazine Reitingai, this year VU scored 64.09 points out of a total 100. VU is highest rated in the areas of academic achievement and study. VU attracts the largest number of the most gifted school leavers in Lithuania.

Among the country’s other higher education institutions VU leads in the category of science, with scientific publications in the fields of natural and social sciences rated the best.

VU graduates enjoy the biggest demand in the labour market, according to a survey of employers in which more than a thousand employers were asked whether the knowledge of graduates meets the needs of their companies and how successful graduates are in finding employment after graduation. Their employability rate was one of the highest among all graduates in Lithuania who graduated in 2019.

VU students say they are involved in the study quality assurance processes and they are satisfied with their study environment, the competencies and proficiency of their teachers. Therefore, the dropout rate of VU students is one of the lowest compared to other universities. Moreover, VU students most likely have the greatest opportunities to go to study to other universities in the world through the Erasmus academic exchange program.

The new rector of VU Prof. Rimvydas Petrauskas points out that VU, as a leading higher education institution, has a responsibility to attract and retain the best Lithuanian and foreign students, talented researchers, and ensure that the most brilliant minds come to study and work at VU.

“VU strives for the consistent development of sustainable internationality, by attracting skilled international students to quality study programs. I see VU as going beyond the level of the national university, strengthening the areas where VU is strong, and every year investing in the quality of studies, professional staff and accumulating high-level research potential,” says the VU rector speaking about his aspirations.

In the ranking of Lithuanian higher education institutions, universities are annually rated according to 48 different parameters, which are divided into 6 major criteria: scientificity and highest achievements of academic staff, added value created by graduates and employer evaluations, students and studies, current and future academic staff, international competition and students’ approach to their university.