Dr. Jonas Jankauskas, after almost 9 years spent abroad, is returning to Lithuania and will be running exercise classes for the students at the Faculty of Mathematics and Informatics of Vilnius University (VU) from this semester on. Recently he also has been elected to the Young Academy of the Lithuanian Academy of Sciences (YALAS). We talk about the career of a scientist and lecturer, as well as problems of cooperation between researchers working in Lithuania and abroad, and his future goals. 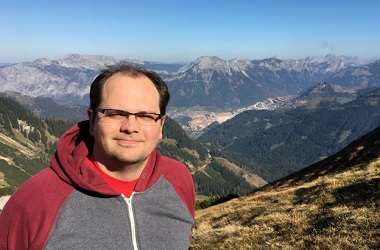 Experience as a lecturer was gained in Lithuanian and foreign universities

"I started my teaching career while I was still studying. I worked at ISM, and later, during my PhD years, as a teaching assistant I did tutorials in mathematics (problem solving practice classes) for students of the Faculty of Mathematics and Informatics at VU" the researcher said.

"In Canada, I worked at two universities - Simon Fraser University and Waterloo. At the first one I would teach the first course in mathematical analysis (Calculus-I), and at the second - Calculus II and linear algebra for students in sciences and engineering. So I saw all the ins and outs. For example, linear algebra lectures were given to more than a thousand students at a time. The team of lecturers consisted of 6 lecturers who taught groups of 100 to 200 students each, " dr. J. Jankauskas said.

According to the interviewee, each of these large courses had one coordinator appointed. The coordinator was responsible for setting up a course plan (the subject content and the teaching schedule) and supervising other lecturers. “In my second year at Waterloo I was assigned to coordinate the linear algebra course and prepare all the lecture material, assignment problems etc. It's not that simple and takes a lot of time".

As dr. J. Jankauskas says, to achieve success in any academic field, a systematic work and good self-discipline is a must: “I am not exactly an ideal type of a scientist. I am more of an owl type person, I like to sleep longer in the morning. I prefer working in the evening. It is very good when I also teach while doing scientific work - it helps to keep up with the day cycle and improves my work discipline”.

Dr. J. Jankauskas research area covers polynomials, matrix based digit systems, and computations. He obtained his PhD in mathematics at Vilnius University. His PhD thesis was recognized as one of the best in Lithuania in 2012, and the dissertation made into the final round of the Stefan Banach contest organized by the Polish Mathematical Society. The young researcher has published more than 20 papers in international peer-reviewed scientific journals.

In his research, dr. J. Jankauskas does a lot of calculations on a computer: “Many hypotheses arise first when performing a computer experiment, seeing the regularity, the patterns, and then one gets an idea how it all functions. Then you have to prove it mathematically”. He also enjoys deriving and writing down formulas. “By trial and error, one observes what works and what doesn't - it's probably what mathematics is".

Having started studying at the Faculty of Mathematics and Informatics almost 18 years ago, J. Jankauskas recalls professors who made him fall in love with mathematics, who got him and other students interested in their topics: "Hamletas Markšaitis, for instance, was considered to be ‘an axe’ (a lecturer who is hard to a common folk), but I liked him, he inspired me and many other people so much”. “I can also mention Ričardas Kudžma for his non-standard, but interesting approach to the first year Calculus course, and Vigirdas Mackevičius for his classical, carefully worked out second year Calculus course in multiple variables and Fourier series. And, of course, the unforgettable Romualdas Kašuba – later, I had the privilege to work side by side with him at many mathematical contests and at “Kangaroo” math summer camps. That's how mathematics got me and I chose to remain in this field."

Reasons that led to the return to Lithuania

Dr. J. Jankauskas says that he had job offers abroad, but decided to return. One of the reasons is personal - the wish to be closer to friends and family members. In addition, he says he remained in close touch with Lithuania all these years, by following the Lithuanian media and news, and writing papers with his Lithuanian colleagues: “I feel that it’s time to come back and give something in return. There is an opportunity to build your own research team and achieve results here".

A member of the LAS Young Academy notices the lack of cooperation between local scientists and émigrées working abroad. He is convinced: we need to communicate more pro - actively so that we do not become alienated.

“Two separate scientific communities are emerging: the local one in Lithuania and that of emigrants working abroad. The ties between them are not particularly strong. Lithuanians living abroad have little idea what can be done in Lithuania, whether there would be any prospects or not. They create their own images of how it is here. On the other hand, there exist somewhat conservative, defensive attitudes among the local Lithuanians, there is a lack of live communication. Each side is waiting for the other to reach out first,” the scientist said.

One of the goals of dr. J. Jankauskas, as a member of the LAS Young Academy, is to establish and maintain active contacts with Lithuanian scientists who are working abroad. “The idea is to build an active community of early career mathematicians in Lithuania and abroad - and try to do things together, like organize visits of our émigrée working abroad with lectures and seminars. For those returning to live and work in Lithuania - to help orient themselves, maybe to help to write a funding application, and things like that”, says a member of the LAS Young Academy, a coordinator of the Annual Meeting of Lithuanian Early Career Mathematicians, adding that he would like as well to contribute to the revival of the community.